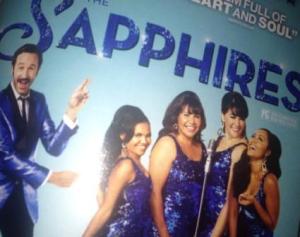 Soul music is about loss. So says inept Irish manager, Dave (played by lovable oddball Chris O’Dowd). The Sapphires is about four Aborigine women making their way as a soul group in 1968. Under the tutelage of hapless Dave, they sing their way through the chaos of the Vietnam war and become an unlikely success story. Entertaining the troops, they heal the wounds that have divided them, create a few new rifts, find passion and love.

This is a story of colour. But not necessarily skin colour as you might expect. It’s about the vibrant yellow of the rapeseed field you ran through as a child; the brilliant colour of freshly-picked oranges; the burst of sun on the horizon even in a field of war. And, of course, the sapphire blue of soul. Yes, the girls come under attack for their Aboriginal heritage but it’s done with such lightness of touch, you forget the real adversity these women would have faced and remember to admire their courage and heart. Instead of hammering you over the head with the race card, the movie is somehow a celebration of culture and heritage without the need to really turn the screw.

Chris O’Dowd is inspired as the inebriate manager brought back to life by the vigour and spirit of the Sapphires. His charming scruffiness, acerbic wit and simple sincerity are one of the joys of the movie but he also manages to be truly touching in all the right places as he falls in love with feisty Gail, played by Deborah Mailman. For her part, Mailman adds a ferocity of her own to her performance of the big sister brimming with strength but laced with a secret vulnerabiltiy. Between them, we get some of the best lines of the movie, littered with a joyous mix of Aussie and Irish slang. Incidentally, the moment when O’Dowd answers a group of boys hailing him as a ‘drongo’ with ‘gobshites’ is simply genius.

At the end of the movie, it’s a pleasant surprise to find it’s been inspired by a true story. A surprise but not surpirisng since women of daring who fight prejudice and inspire us with their bravery are the stuff of everyday, aren’t they? Sadly, they don’t always get translated so lovingly and humorously to the movie screen. In the words of The Sapphires: ‘deadly’!