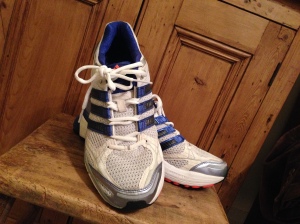 Last week MP Helen Grant (supposed She Warrior of Sports and Equality) made some pretty laughable comments about women and ‘feminine sports’…the like of which barely merit any comment at all other than a derisory shrug. For those of you who missed it though, she dared to suggest we women folk who have shunned sport in our droves,  should merely take up less aggressive sports; those in which we can remain graceful, probably un-sweat-drenched instead.

Now, admittedly, I’m a bit of a slob most of the time. I can count on no hands the number of sporting activities I’ve attempted in the last year. In fact, my idea of a real workout is to carry my 10 month old up the stairs…with the occasional ‘zoom, zoom, zoom’ game thrown in for good measure. But it wasn’t always that way. And, Ms Grant, I’m pretty sure it has nothing to do with femininity and EVERYTHING to do with equality. Sadly, you seem to have got the wrong end of the right stick.

You see, for women as well as men, I’m pretty sure all people weren’t created equal when it comes to sport. Natural selection and all that. This fact is incontrovertible. I can’t and won’t seek to argue with it. But therein lies the rub, my friends. Don’t get me wrong. I’m not one of the anti-competition, anti-winner, anti-loser mob but until our culture recognises effort in sport as well as simple achievement, we are always going to engender a deep hatred of sport in huge masses of folk. Menfolk too.

Why? Well, I’m almost too sad to say it. As a teacher, I can’t abide finger-pointing at the profession but, with a heart of lead, I have to admit that school is where my unswerving dislike of sport came from. Sir and Miss P.E., I’m sorry to say it but – for me, at least – it is your fault and your fault alone that I hate sport (yes – even the feminine ones!) Okay, I have to take the blame for my own apathy too and I’m a lazy arse in my old age but I’m pretty sure you could have got me hooked if you’d only tried. You see, as a pretty small, pretty average girl, I was terrified of a hockey ball and allergic to cross-country and my eagle-eyed P.E. teachers spotted this instantly but if I concentrate very hard, I can envisage a time when that wasn’t the case.

I have an image of myself at primary school that remains pretty vivid even now, (well) into my thirties. There I am, flying across the sports field, wind whipping back my hair,  huge smile on my face as I speed past the boys and sprint my way to glory. That was me, that was. A tiny streak of thunder. Trying very hard. But that trying soon ceased when I learned I was a hopeless…worse than hopeless…case.

But I have to wonder about the chicken and the egg. Was I rubbish at sport because I was rubbish at sport or was I simply demotivated by teachers who’d labelled me lame? That was me, wasn’t it, blazing across the school field? That small girl, loving the feel of her feet pounding the clods of earth…she wasn’t an apparition?

There’s another image alongside this first one. This time at secondary school…I suppose I’m about fourteen. Standing in a line of ‘sporty’ girls on a windy day…you know the girls, the ‘naturals’…the ones who, if you’re honest, you’d really like to be. Standing beside them, I wait to hit the tennis ball over a distant net, aiming for a seemingly miniscule box on the other side. When I’m the only girl in the line to hit the ball over the net and land it in first time, and with some accuracy into the bargain, the look on Miss P.E’s face is inexplicable. She doesn’t know what to say. She can’t bring the usual gleeful war cry of champions to her lips. But it’s clear; it’s obvious. She’s impressed, in spite of herself. And after a long pause in which she looks at the better girls as if they’ve let her down, she does find the words: “That was good,” she says and it’s almost a whisper. A stunned question. But it was too little, too late. My attitude was already formed. You don’t care about me and I don’t care about your stupid sport. So I shrug and go to the back of the line as if I’m not back on that field of glory again. As if I haven’t just won a grand-slam.

I know I don’t want this for my daughter. I’d like her to be one of the ‘naturals’ but, if not, I don’t want her to dig her heels in like her stubborn mother, either. How do I change her habits when mine are so fully formed? Well, I’ll need to work that out as I go along but maybe we shouldn’t be looking at the gender of sport but the equality of it…in schools at least. Yes, there will be winners – there should be winners, and with that comes losers but there must be some way of celebrating sport just for fun as well. A way of capturing that young hunger to burn across the field in the sunshine. Just for the sake of it. Just for the thumping blood in our ears. In that love, at least, we ARE all created equal…

4 thoughts on “A Sporting Chance”